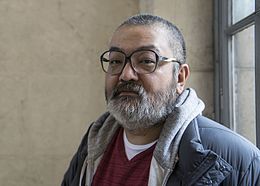 I lost my naïveté in San Francisco because I become a sponsor and attended the conference at http://www.queersandcomics.cca.edu/ California College of the Arts.

My main motivation to go was so that I could meet the celebrated artist http://tagagen.tumblr.com/ Gengoroh Tagame from Japan.

I captured the unforgettable moment when Tagame clarified for a large San Francisco audience that he never intended his very explicit “Human Carrot” visual story to be for all ages.

Tagame stands as the strongest influence upon me as an artist and my visual works more than Tom of Finland, Dom “Etienne” Orejudos, and Greasetank, who are no longer with us. At the moment I got to speak to Tagame, eye-to-eye, I was overcome with joyful emotion. In the decade that I’ve been creating visual works for gay men, I never could have even dared to imagine meeting Tagame in person like I did.